In Savannah, the Ghosts Hunt YOU

Ghost tour guide Enocha debunks some myths and tells us the true history behind the ghost stories of the most haunted locations in Savannah. And she answers the question burning in Becky’s mind since her visit to Savannah this Spring: are the ghost stories really true?

Savannah ghost stories are like gossip in the South—they tend to take on a life of their own after a while. Enocha Edenfield uncovers the historical truths behind the lore for her Savannah ghost tour company. Sometimes the truths behind these ghost stories are scarier than the legends and folklore. Discuss this episode in our Facebook group at https://facebook.com/groups/homespunhaints

Our amazing SEO specialist Stephanie Long can be found at https://stephaniemariemarketing.com/ 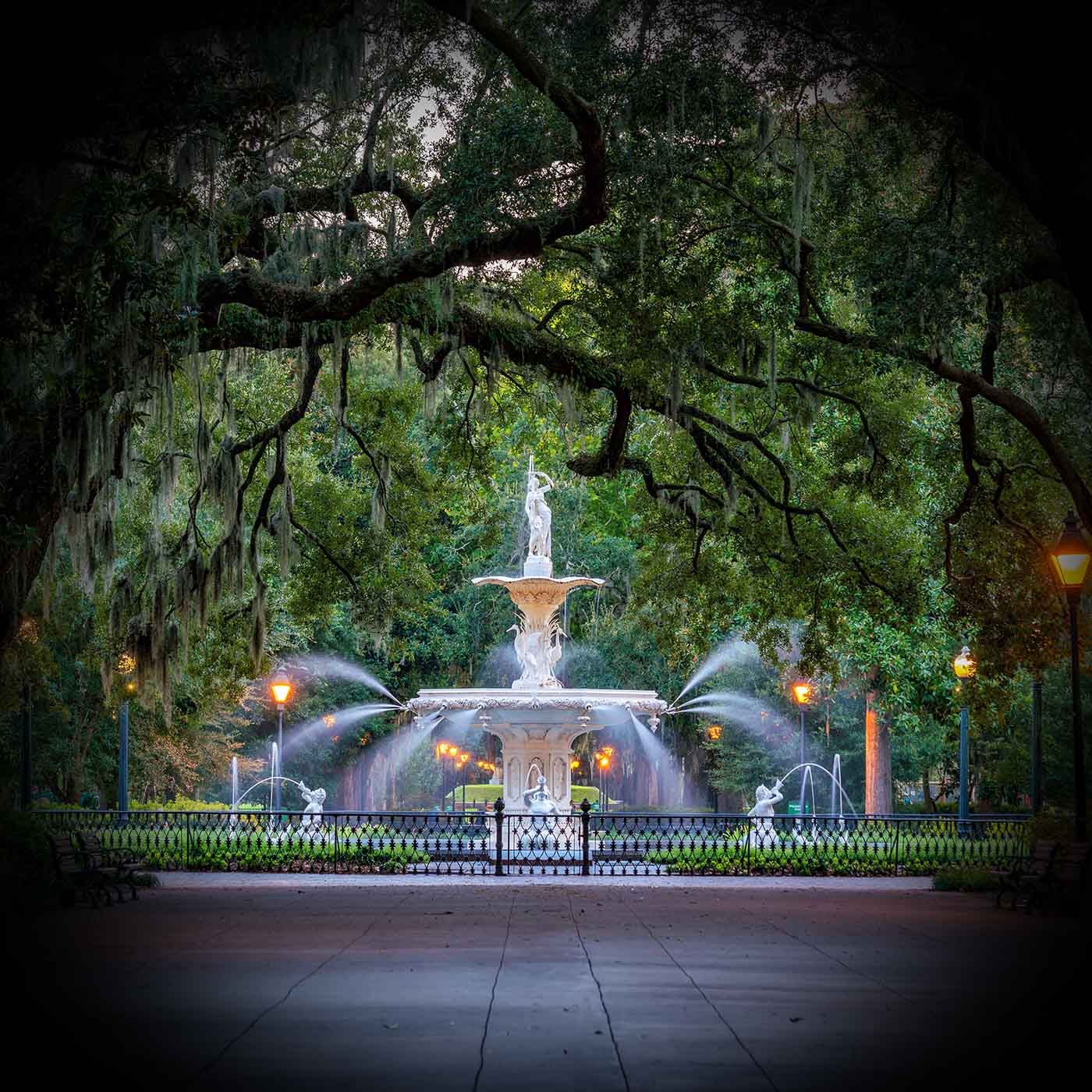 Most paranormal experiences are pretty subjective. That is why we are sometimes hesitant to share them. Scared though we may be during a ghost encounter, it’s tempting to shrug it off afterwards. “It must have been a shadow,” we tell ourselves, “maybe that was just the wind.”

If you’ve been sitting on the fence about ordering that cute Ouija board t-shirt, now’s the perfect time to pick a side before your butt starts hurting. Check out our merch and get something truly unusual!

Want head-turning spooky enamel pins, socks, and other accessories? Check out Ectogasm and use code HAINTS for 10% off all orders over $20.

About the Guest Enocha Edenfield

When the 2020 pandemic hit, journalist Enocha suddenly found herself spending a lot more time on TikTok. She decided to share some of her favorite historically-accurate ghost stories from her “city that thinks it’s a small town”, Savannah, Georgia. As her following grew, people started asking her if she could give them a little tour.

Those little tours grew up to be Enocha Edenfield Tours LLC. Enocha uses her journalism superpowers to dig for the truth about Savannah’s haunted history. Her family-friendly, accessible ghost and history tours of the most haunted locations in Savannah ring with both passion and truth.

For more fun and accurate stories about the history and hauntings of Savannah, follow Enocha on TikTok @saltwavesspanishmoss, on IG @eenieedenfield. Enocha also writes a monthly column in the Savannah Morning News called Boo Business. You can probably guess what about.

The Ghost of Alice Riley

Alice Riley worked for a creepy dude who forced her to bathe him. Whereas you would probably quit this gig pretty quick, this was 1735 and she was a 15-year-old indentured servant, so she had to oblige. When the creep was found dead in the bath and Alice and another servant nowhere in sight, the guilty verdict was swift. This, the first murder trial in Georgia, resulted in her alleged co-conspirator being hanged. But Alice revealed that she was pregnant. She spent the rest of her pregnancy in jail, only to become the first woman hanged in Georgia shortly after delivering her baby.

Now she haunts Savannah’s Wright Square, where once the gallows stood. She appears as a 16-or 17-year-old girl dressed in a simple white dress, and will ask unsuspecting tourists if they’ve seen her baby. It may take a few seconds interacting with her before onlookers start to notice the blood still soaking her skirt.

We can’t talk about Savannah ghosts without bringing up the controversial stories surrounding one of the most haunted locations in Savannah, the Sorrel Weed House. While this place may be ridiculously haunted, the reasons why are different from its popular legends. Diana and Becky made a video after Becky went to visit the site in March, and Enocha goes into even more detail in this episode.

About a decade ago, archaeologists excavated a trash pit in Sorrel Weed’s basement and uncovered artifacts from the Siege of Savannah and from the enslaved people working in Sorrel Weed, painting a clearer picture of what life was really like for the servants in this mansion.

Ghost stories of the haunted Kehoe House in Savannah

Kehoe house ghost stories include multiple ghosts of children; twins who purportedly got stuck and died while hiding in the chimney. That is another story Enocha debunks on her historically-accurate private Savannah ghost walks.

The Siege of Savannah

Also known as the bloodiest battle of the Civil War, at least 1200 soldiers (and likely more) lost their lives in this incredibly haunted spot. Enocha made a YouTube video entitled The Ghosts of the Siege of Savannah explaining all about it.

In operation from 1750-1853, Colonial Park Cemetery is the oldest cemetery in Savannah, and one of the haunted locations in Savannah you might visit on a tour with Enocha.

Ghost stories of the haunted Owens Thomas House in Savannah

This 18th century Savannah home boasts some ghosts. The classic grey lady who roams the garden at dusk may just be the spirit of Margaret Thomas, the house’s last resident. Employees swear that objects move about, and sometimes a ghostly man walks through a wall. Ask Enocha to tell you the full story on your private Savannah ghost tour.

We’ve talked about Haint Blue before. You know, the Gullah tradition of painting window frames, door frames, and porch ceilings blue to keep the haints out. Becky has said that realtors in the South will explain the very historic yet less-than-trendy color by saying that it repels wasps. All while knowing damn well that it doesn’t.

No. The color blue isn’t a reliable way to repel wasps. Fun fact, some studies suggest colors like black and red do attract insects like bees and mosquitoes, while colors like green and purple are less visible to them and attract less attention, especially from the bitey ones.

And the story about Haint Blue confusing evil ghosts by mimicking water is just insulting. C’mon, these ghosts didn’t die yesterday. They know that’s paint. It’s on the ceiling, for Pete’s sake.

But Enocha clued us in to a power of the specific blue dye within the original Haint Blue paints. The people who popularized this color of house paint were actually those forced into the US through the trans-Atlantic slave trade. If you trace the color back to Western Africa, the color blue in Haint Blue paint was made from indigo.

While we know indigo as the I in ROY G BIV and the blue in blue jeans, it’s more than just a color. Indigo is a tree with medicinal properties. It just so happens that one of the properties of the indigo plant is repelling mosquitoes. Aha! So the original indigo-colored Haint Blue paint may just have repelled insects after all!

African tradition also describes indigo as a color symbolic of protection. This makes perfect sense to us: repelling more mosquitoes equals reducing risk of malaria. Today, Southerners use Haint Blue paint to block evil haints from entering the home. A haint is the bad kind of spirit that makes you sick. Sounds like a disease-ridden mosquito to me. The wasps? Likely just a red herring.

We hope you enjoyed learning some of the real history behind the ghost stories of haunted Savannah!

Becky wishes she’d found Enocha while she was in Savannah earlier this year. She laments that, after taking a ghost tour of the haunted Sorrel Weed House, she read some historical accounts that contradicted some of the popular legends. Someday, the Homespun Haints team is going back to Savannah to have Enocha tell us the truth behind the scariest Savannah ghost stories. In the mean time, if you’ve taken a Savannah haunted ghost tour with Enocha Edenfield Tours, please drop a review or shout-out in the comments below.

Listen to “In Savannah, the Ghosts Hunt YOU” on Spreaker.